St. Ann's of Indianapolis, Indiana, founded in 1917 by Father John F. Patterson (left), was largely the result of the growth and expansion caused by World War I.

Earlier, the needs of the people of this area was served by the Franciscan Mission of St. John the Baptist of Valley Mills, Indiana (about 1877-1903) and Assumption Parish in West Indianapolis, Indiana.

It was announced by Bishop Silas Chatard on Thursday afternoon December 5, 1916, that a chapel was to be provided for Catholic families, to be built on Sterling R. Holt property purchased by the Bishop several years ago.

The original boundaries were: North to Washington St.; South to Mooresville; East to Belmont; West to Plainfield.

An anonymous account found in the historical files of St. Ann's relates that:

One day Tom and Bill Harmon came driving in with Father Pat in a buggy and said the Bishop said that they had to build a church.  They had a meeting.  They decided to use the house the Bishop had given to them for the church.  (A friend of the Bishop's had won the house in a lottery and gave it to the Bishop.  It had to be moved to the property Bishop Chatard bought.)  They borrowed $400.00 for lot and house next door for the priest at 4 percent interest. 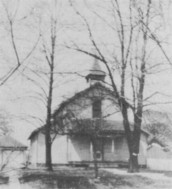 The parishioners became fund raisers, architects, carpenters, plumbers, concrete mixers, and house movers.  (Yes, house movers.  Houses were moved from one place to another like pieces in a game of checkers.)

Partitions of the house that was to be used as the church, were replaced with beams and one side of the porch was boarded up to make more room inside.

A large stove stood in the middle of the church and during Mass a volunteer acted as keeper of the fire.

It was said by a senior parishioner that, "Father Patterson never met a stranger and he enjoyed many poker games with the men of the parish."

Overalls and a straw hat were no strangers either to Father Pat, for he raised hogs and planted a cabbage patch for his winter supply of food.  The cabbage patch harvest was used to make sauerkraut.

The hogs roamed in the alley that was between the present Sister's house and the Priest's house.  In the fall of the year Father Pat, wearing his overalls and straw hat, would load his hogs into his spring buggy and take them up to Fred Tribe's farm to be butchered, lard rendered and sausage made.

Across from Holt Road, there was a half mile race track under roof and seven barns.  During World War I the covered track was converted for `war work,' and part of it was converted into a dorm for women who worked in the war plant.

After the war ended, St. Ann's trustees purchased the left over lumber from the Government in order to build their first school rooms.  (Mrs. Stirwald was the first teacher with forty-four pupils.)

Later, in the early 1920's a two room school house was built in the middle of the playground.

Lay teachers taught here until 1926 when the Sisters of Providence came to teach.

Sister Mary Lewis and Sister Alberta were the first religious teachers.  Sister Alberta taught at St. Ann's until June 1938.  For twelve years she gave whole hearted service amidst many privations and inconveniences, such as the lack of inside restrooms for the school children.

At this time there was a one room public school which was in the old hotel at Farnsworth and Holt Roads.  This hotel was used by business people and war workers at the plant across the street during World War I.  The people of St. Ann's often used the hotel for their card parties.

Catherine McCauley, the housekeeper, was paid $4.00 per week but the average Sunday collection was about $2.50 per week.  (This deficiency would cause a line graph to show a definite downward trend.)

In the early 1920's the Ku Klux Klan was very active.  Whenever there was a social for a fund raising purpose, the Klan would try to interfere.

Once a cross was burned across from the church.  After this, several men of the church, bearing guns, would hide in the weeds to scare off the Kluxers.

The only source of revenue for many years came from Pew Rental.  This system of collection was used from 1919 to 1922.  Each family would pay rental on the pew in which they sat in church.  This amounted from $5.00 to $25.00 a family per year.  The account book of 1920 reveals the following entry: 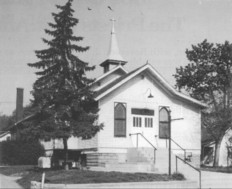 The second Church at St. Ann's was a pre-fab built in 1926 of materials shipped by train from Chicago.

Before any building could be started the first church had to be moved from the lot to the parking lot.  (Here we go again, moving houses.)

The men would come after their own work was done to work on the church.  Building was started in the Spring of 1926.

The main and two side altars, the communion rail, pews, and bell came from a church in Knightstown that was closed.  Lights from the original church, which was still being used while it rested in the parking lot, were moved to the new church.

The original church then was sold to Mr. Kelse.  He tore it down to move it to his property near Stout Field and rebuilt it there.

Problems began when the automobile factory nearby was closed.  Many Catholic families had to move.

Added to these problems was the flooding of the church's basement due to the position of the State Drainage Ditch for `run off water.' So Father Pat investigated the situation and was instrumental in having the state drainage ditch relocated to its present location.

The struggles of the years are spoken clearly by the hard facts and figures in the Financial Record books.  For in 1928 there showed on the books a debt of $18,000.00 with old Mayor Kaiser's Bank.

Nevertheless, the people of St. Ann's under Father Pat for twenty-one years had many blessings along with the tribulations of the depression years.

The men and Father Pat worked together and still had time for a game of poker or two.

The ladies ran many rummage sales and cooked many chicken dinners.

The young people planned and organized their own picnics and dances.  They had lots of fun just being together.

(The transfer of Father Pat created an empty feeling, for most of the parishioners felt as if a member of their own family had moved far away.)

This event happened only once a month but it would be an all day affair.  (A very long day!)

The preparation started early on Saturday morning.  One could find Father Riedinger up to his elbows mixing a big bowl of slaw.  He worked as hard as his people.