More property was acquired for the expansion project.

Early in the 60's the Tithing Program and its procedure was the topic of interest.  Pledge cards were distributed and signed.  The fund for the new church began to increase slowly.

The rest of the 60's saw the energy and supreme effort that was spent in acquiring the rest of the property needed to complete the expansion plans.

In May of 1964 Father Eckstein (left) was appointed Associate Pastor at St. Ann's.

On January 19, 1965, another first for St. Ann's - the first Holy Mass offered that morning facing the people.

Father Wilberding was concerned about his yawning he was afflicted with from time to time.

The 50th Anniversary celebration of the founding of St. Ann's was on September 17, 1967.  The affair was talked about for months afterwards.

Relocation once again became the subject, this time on Mann Road, south of Kentucky Ave.  A survey was taken during the middle of 1968 by the building committee of St. Ann's Church, which revealed the following:

Retired and families with children out of school:      88 families** or 59 percent.D

Retired and families with children out of school: 60 families or 41 percent.

*There are 30 families in Drexel Gardens.  If transferred to St. Joseph this would leave 39 percent in Wayne Township and 61 percent in Decatur Township.

**Small section of Decatur Township between Troy and Highway 67 included.

Once again the Archbishop thought it would be best for St. Ann to stay in her present location.

The work to bring a dream to reality required all of St. Ann's and her leaders supreme effort to inspire commitment to building the new St. Ann's Church on its present location.

The planning committee had to take into consideration the possibility of the Holt Road Expressway expansion, they therefore moved that the new church be located on Berwin and McClure.

The facts and beads of perspiration details are recorded in Father Wilberding's journal.  It points out clearly what was done and how all the diversities of human nature came together to accomplish an objective that could be seen and touched.

But something else was also accomplished.  Something else was added and this addition was intensified in the spirit of St. Ann's of which can not be seen nor touched but most certainly can be felt.  (Definitely!)

On Holy Thursday, April 3, 1969, the last Mass was celebrated in the old church by Father Eckstein at 8 a.m. and was well attended. 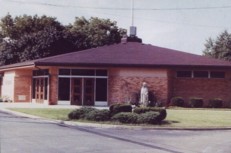 Dedication of the new St. Ann Catholic Church, Indianapolis, Indiana was on Sunday the twenty-fifth of May, 1969, by the Most Rev. Paul C. Schulte, Archbishop of Indianapolis.  Below are thumbnail images of the Dedication Program, provided by Tom Staten, that was passed out at the dedication ceremony in 1969.

The program below shows the Master Plan for the land use for St. Ann at that time.  Click to enlarge.